The introduction of a rotavirus vaccination program has led to significant and sustained reductions in both hospitalizations and emergency department visits across the United States, according to research published in Clinical Infectious Diseases.

Researchers sought to assess the long-term effects of the United States rotavirus immunization program on both the epidemiology of rotavirus hospitalizations, as well as emergency department visits in children aged < 3 years. In addition, investigators aimed to describe the effect of the rotavirus vaccine, including indirect effects and genotype shifts.

The Centers for Disease Control and Prevention’s New Vaccine Surveillance Network conducted active, prospective, population-based surveillance for both hospitalizations and emergency department visits resulting from acute gastroenteritis in children aged < 3 years over 11 consecutive rotavirus seasons. Children were enrolled in surveillance if they were aged 15 days through 36 months and had acute gastroenteritis ≤10 days duration.

Between 2006 and 2016, investigators identified 10,637 children who were eligible for inclusion in the study, of these, 8612 (81%) were enrolled in the study. Among enrollees, whole stool specimens were collected and tested for rotavirus from 81% of participants, including 92% of 2384 children who were hospitalized and 77% of 6228 children who visited the emergency department.

Among children aged ≥8 months, rotavirus vaccine coverage significantly increased over time: vaccine coverage in 2007 was 10%, and by 2016 it increased to 93%. In every year except 2010, a higher percentage of children who were rotavirus-negative were vaccinated compared with those who were positive.

A significant difference in genotype distribution was noted over the 11-year study period. During the pre-vaccination seasons, G1P[8] was the prominent genotype (63%), but was present in a significantly lower percentage of postvaccine period cases (7%). G2P[4] was stable over both periods, whereas G3P[8] significantly increased from 1% to 25% during the pre- to post-vaccine periods and G12P[8] increased from 17% to 40%.

Study limitations included the use of the New Vaccine Surveillance Network, which may not be nationally representative, as well as an insufficient number of cases for some age groups in some years.

“A decade of population-based active surveillance for acute gastroenteritis demonstrated a dramatic and sustained [decrease] in rotavirus hospitalization and [emergency department] rates after the introduction of the rotavirus vaccine program,” the researchers concluded. “Continued surveillance, including older children and adults, will be important to examine the indirect effects, duration of immunity, and genotype changes over time.” 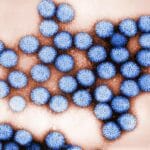