For patients with cystic fibrosis (CF), using a CF transmembrane conductance regulator (CFTR) modulator was associated with reduced hospitalizations for acute pancreatitis (AP). These findings, from a retrospective analysis, were published in The American Journal of Gastroenterology.

Data were sourced from the MarketScan database, which includes >32 billion service records from inpatients and outpatients in the United States. Between 2012 and 2018, all patients (N=10,417) with CF were assessed for AP hospitalization on the basis of CFTR modulator use.

This study may have been limited by defining pancreas sufficiency status by distribution of pancreas enzyme therapy rather than laboratory data. 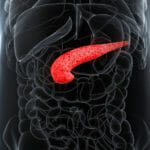