Elective laparoscopic sigmoid resection improves quality of life (QOL) in patients with recurrent, complicated, or persistent painful diverticulitis, but is associated with a 10% risk for major complications, according to a study in JAMA Surgery.

A prespecified interim analysis was conducted when 66 patients were randomly assigned and their 6-month follow-up data were assessable. The primary outcome was the difference in Gastrointestinal Quality of Life Index (GIQLI) scores at randomization and at 6 months. GIQLI consists of 36 questions on gastrointestinal symptoms.

In the ITT cohort, 2 patients randomly assigned to surgery had postoperative abscesses that were percutaneously drained. An additional 2 patients who underwent surgery had anastomotic leakage, which led to emergency laparotomy and transversostomy in 1 patient and emergency laparoscopic lavage and drainage with transversostomy in the other. The stomas were reversed after 7 and 2.5 months, respectively, which resulted in a 10% rate of Clavien-Dindo grade III complications in the surgery group. No mortality occurred within 90 days of surgery, and none of the patients in the conservative treatment group had a stoma within 6 months.

A total of 72 patients (37 in the surgery group and 35 in the conservative treatment group) responded to the baseline and 6-month QOL questionnaires and were included in analyses for the primary outcome.

Among several study limitations, the trial was prematurely terminated, and the number of patients included was relatively low. Additionally, the study did not include sham surgery to mask the intervention, and so a placebo effect in QOL results is possible. Finally, some patients did not respond to the QOL questionnaires, and thus the primary outcome was not assessable in all randomly assigned patients.

“Further outcomes of the LASER trial will be reported when longer follow-up data are assessable,” noted the researchers.

Disclosure: One of the study authors declared an affiliation with a pharmaceutical company. Please see the original reference for a full list of authors’ disclosures. 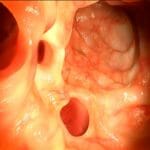