The gut microbiome has become one of the most researched topics in gastroenterology. However, it is not yet understood how changes to the gut microbiome affect certain malignancies, particularly colorectal cancer (CRC).

Despite improvements in detection and prevention by colonoscopy and other forms of testing, CRC still has a significant effect on patient morbidity and mortality. In the United States, CRC is the third most common cancer and cause of cancer death. Likewise, there is interest in developing new modalities to prevent CRC.1

Because the gut microbiome plays a critical role in the immune system, it has garnered interest as a target for both preventive and therapeutic strategies in patients who develop CRC. Examining the gut microbiome for biomarkers that may aid in the detection of pre-cancerous adenomas and/or CRC has significant utility in both research and real world settings. In addition, modulating the composition of the gut microbiome may provide opportunities for chemoprevention and treatments that could be bolstered by concurrent changes in a patient’s modifiable risk factors. Song et al recently published a detailed review article evaluating interactions in the gut microbiome, environmental risk factors, and the development of CRC.3

Patients who CRC also often show signs of dysbiosis that can contribute to the pathogenesis of the disease. Many studies have shown that patients with CRC typically have less diverse microbiota compared with those of healthy controls.4 Although the overall diversity of gut microbiota may be lesser in patients with CRC, certain types of bacteria can be more prevalent than usual. These include Fusobacterium nucleatum, Enterotoxigenic Bacteroides fragilis (ETBF), and Escherichia coli, among others. However, there can be considerable variation between the microbiota of patients with CRC as well as differences depending on the stage of CRC.

Fusobacterium nucleatum has been found in 10-15% of colorectal tumors and has been associated with more advanced disease stage, shorter duration of patient survival, and higher risk of recurrence.3 The exact pathophysiology of this interaction is not entirely understood, but appears to involve modulating the immune response to malignancy by reducing T cell infiltration. Additionally, certain patients with metastatic disease can have Fusobacterium nucleatum found in metastases, which implies a role in the translocation of disease.

ETBF produces the B fragilis toxin and has been associated with CRC in multiple studies, although the exact association is inconsistent across certain studies and appears to be dependent on the assay used. In available studies, ETBF is associated with late stage and right-sided cancers as well as familial adenomatous polyposis and sporadic premalignant lesions.

Certain E coli strains have also been associated with late-stage tumors, although the pathogen’s ability to invade the luminal mucosa can make it challenging to detect.

Additional types of bacteria that have demonstrated an association with CRC include Streptococcus bovis, Streptococcus gallolyticus and several species of Salmonella. Other than bacteria themselves contributing to CRC, it is important to consider certaub bacterial metabolites as well.  Short chain fatty acids (SCFAs) have been associated with decreased risk of CRC while bile acids are associated with increased risk.

In addition to gut-specific microbes, there is evidence to support the association of the oral microbiome with CRC pathogenesis. Implicated oral bacteria include: Alloprevotella, Haemophilus, Neisseria, Parvimonas, Prevotella and Streptococcus. Alterations to the oral microbiome may be one way in which smoking can predispose patients to CRC.

In addition to the independent sequeale of the microbiome itself, there is an extensive list of environmental factors that can impact the microbiome. The link between obesity and CRC risk may be at least partially attributable to alterations in gut microbial composition. Obesity may cause dysbiosis, leading to an overall decrease in microbiome diversity with ensuing increases in Firmicutes and reduction in Bacteroidetes. Obesity may also lead to a reduction in SCFA producing bacteria, which could predispose patients to CRC. Obesity also promotes a pro-inflammatory state, which can lead to increased systemic inflammation via altered intestinal barriers. Lipopolysaccharide (LPS) is an endotoxin that has been specifically associated with higher BMIs and plays a role in these “leaky” barriers.

In some studies, patients who have high levels of physical activity have been shown to have lower risks of colon, but not rectal, cancer.  Athletes typically have more diverse gut microbiota, with greater proportions of Akkermansia muciniphila and higher levels of SCFA-producing bacteria. Unfortunately, it is difficult to determine if the changes in microbial diversity found in many of these studies are specifically due to physical activity, diet, body habits, or a combination of these factors. Consequently, other research has not shown a significant association between physical activity and diversity in the microbiome.

High fiber diets may also reduce CRC risk by inducing production of SCFAs. However, the data from the associated studies is inconclusive. Aside from its impact on SCFAs, fiber can assist in augmenting the immune system and possibly improve immunosurveillance of Fusobacterium nucleatum. Consumption of red and processed meats has also been associated with an increased risk of CRC, possibly by encouraging production of toxic metabolites by gut bacteria that could predispose a patient to CRC. These changes may be mediated by the high levels of choline, carnitine, deoxycholic acid, trimethylamine N-oxide (TMAO), bile acids, and hydrogen sulfide that are induced by red meats.

The link between the gut microbiome and CRC will continue to develop. Future studies may aim to understand how fecal microbiome analysis could be used in conjunction with other modalities such as fecal immunochemical testing (FIT) and/or stool DNA for CRC screening. These studies may aid in understanding whether targeting certain high risk may improve long term outcomes in patients using antibiotics. Outside of this, fecal microbiota transplantation (FMT) may also represent an intervention that could alter CRC risk. There are obvious safety concerns with FMT, though studies evaluating its effect on the prevention and treatment of CRC in the correct patient population could prove to be beneficial. The long-term effects of certain strains of probiotics on the prevention and treatment of CRC should also be studied. 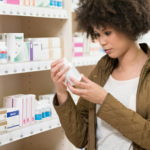