Gut transit time measured with a novel blue dye method is a more informative marker of gut microbiome function compared with traditional measures of stool consistency and frequency, according to a study in Gut.

The participants consumed 2 muffins with blue food coloring paste within a 10-minute period along with chocolate milk. With use of the blue dye method, transit time was measured from the time of muffin consumption to the first visualization of blue within a stool.

Among several study limitations, the researchers noted that the blue dye method has not been validated in comparison with other gut transit methodologies, such as the radio-opaque marker technique or scintigraphy. Additionally, stool consistency was assessed based on recall within the past 3 months, which may have led to some inaccurate data.

“The blue dye method is a novel, inexpensive, and scalable method of gut transit assessment providing valuable gut health and metabolic insights,” the study authors commented. “Its wide use in both research and clinical settings could facilitate the advancement of our understanding of gut function and its determinants, as well as the complex interactions between gut physiology and health outcomes.”

Disclosures: This work was supported by Zoe Global Ltd and other organizations, and some of the authors reported affiliations with Zoe Global Ltd. Please see the original reference for a full list of disclosures. 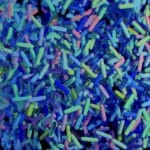