Antiviral medications telbivudine and tenofovir disoproxil fumarate (tenofovir) were safe, effective, and well tolerated in pregnant women with chronic hepatitis B (HBV), with comparable efficacy in reducing vertical transmission (from mother to child during the perinatal period) of HBV compared with those who were untreated, according to a report published in the Journal of Viral Hepatitis.

Prevention of vertical transmission is crucial in the battle to curb HBV infection, particularly in endemic areas. While telbivudine and tenofovir are both routinely administered to pregnant women for transmission prevention, their safety and efficacy for this purpose has yet to be rigorously examined. Investigators sought to compare HBV vertical transmission rates in mothers receiving 1 of these 2 medications during the second or third trimester with those of mothers receiving no treatment, in the largest study of its kind to date, according to the researchers.

Between June 2010 and December 2016, a multicenter prospective cohort study enrolled 893 women with chronic HBV infection (HBV DNA >106 IU/mL), who were being treated with telbivudine (600-mg daily initial dose) or tenofovir (300-mg daily initial dose) during the second to third trimester of pregnancy (22-28 weeks gestational age) or who were receiving no therapy while pregnant. The primary outcome was the vertical transmission rate, defined as the proportion of infants at 28 weeks old who were either positive for HBV DNA or positive for HBV surface antigen (HBsAg). The secondary outcome was the percentage of women with predelivery serum HBV DNA levels <2×105 IU/mL and <103 IU/mL. Safety outcomes included maternal adverse events and medication tolerability, as well as infantile congenital defects. Multivariate logistic regression analysis was conducted to evaluate clinical associations.

At delivery, mothers in the 2 antiviral treatment groups had similar reductions in HBV DNA levels, with mean decreases in viral DNA loads of 5.91 and 5.79 log10 IU/mL in the telbivudine and tenofovir arms, respectively, and no significant differences between them. The untreated group, in contrast, experienced a slight uptick of 0.48 log10 IU/mL in viral load. Nearly all mothers in both medication groups achieved HBV DNA <2 x 105 IU/mL and approximately half of each group had viral loads <103 IU/mL at delivery.

Multivariate analysis demonstrated that the only factor significantly associated with this viral DNA decrease was the maternal baseline HBsAg titer (P =.015). For the intention-to-treat analysis, vertical transmission rates were 4.41%, 2.42%, and 22.08% in the telbivudine, tenofovir, and untreated groups, respectively. Antiviral medications significantly reduced vertical transmission rates compared with those of the untreated group (3.52% vs 22.07%; P <.001). The rate of vertical transmission increased along with increasing maternal HBsAg titers, such that estimated infection rates of 5.32% and 17.65% were seen in those infants born to women with HBsAg titers of >4 and >5 log10 IU/mL, respectively.

There were no serious adverse events reported in mothers or infants, and both medications were well tolerated. The most common adverse events involved gastrointestinal complaints. Infants from all 3 groups had comparable rates of birth complications and achieved similar developmental benchmarks.

“These findings provide evidence to identify high-risk populations using HBsAg titer, which … can be widely applied as a forewarning index in developing areas with high HBV epidemics,” noted the authors.

Funding and Conflicts of Interest Disclosures: 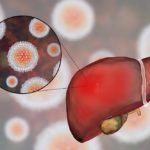