Study data published in the Annals of Internal Medicine support the efficacy of rifaximin for the prevention of overt after placement of a transjugular intrahepatic portosystemic shunt (TIPS). In a clinical trial of patients with cirrhosis who underwent TIPS, rifaximin was associated with a significantly lower incidence of overt hepatic encephalopathy compared with placebo.

This randomized, placebo-controlled study enrolled adult patients with cirrhosis who were receiving treatment at tertiary care centers. Patients who were planning to undergo TIPS to treat intractable ascites or to prevent variceal bleeding were eligible for inclusion. Participants were randomly assigned to receive either rifaximin 600 mg twice daily or placebo twice daily. Medications were initiated 14 days prior to TIPS placement and continued for 168 days following the procedure.

Patients were monitored for adverse events throughout the trial duration. Multivariable logistic regression models were used to assess the relationship between rifaximin and the incidence of overt hepatic encephalopathy.

Between October 2013 and June 2016, a total of 197 patients were enrolled from 12 study sites. The majority (77%) of enrollees were men, with a mean age of 60 (±8) years. The most common cause of cirrhosis was alcohol use (n=170; 86%). A total of 25 patients (13%) had a history of overt hepatic encephalopathy. Demographic and clinical characteristics were comparable between study arms. Overall, 186 patients underwent TIPS and were included in analyses; among them, 93 received rifaximin and 93 received placebo.

The incidence of other liver disease-related complications was not different between treatment groups. A total of 22 patients died during the initial 168 days of follow-up; among them, 10 received rifaximin and 12 received placebo.

Seven patients received a liver transplant during follow-up. The probability of transplant-free survival was not significantly different between the rifaximin and placebo arms (87% vs 81%; P =.27). Adverse events were not more common with rifaximin compared with placebo.

Results from this study support the use of rifaximin for prevention of overt hepatic encephalopathy after TIPS placement in patients with cirrhosis. As a study limitation, however, the investigators noted that the majority of participants had alcoholic cirrhosis. As such, these data may not apply to patients with cirrhosis from other causes. Additionally, the efficacy of rifaximin beyond 6 months remains unknown. 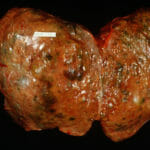