SAN ANTONIO — Zinc deficiency may perpetuate the underlying pathophysiology of irritable bowel syndrome (IBS) as well as associated psychiatric conditions, via the role zinc plays in the “brain-gut” axis, the immune system, and gastrointestinal barrier integrity, according to research presented at the ACG Annual Scientific Meeting, held October 25 to 30, 2019, in San Antonio, Texas.

IBS affects 12% of the population, but the quality of evidence supporting current interventions has been rated very low; most patients with IBS report unchanged or worsened symptoms over time. This cross-sectional analysis was designed to compare serologic markers of nutritional status and dietary composition in individuals with and without IBS to identify potential targets for supplementation therapy. All 17 national surveys conducted in the United States between 1959 and 2019 were screened for eligibility, but only one, the Second National Health and Nutrition Examination Survey (NHANES II) (1976-1980), provided comprehensive IBS data. Investigators performed a cross-sectional analysis of data on 12,295 adults age 18 to 74 years, with IBS diagnosis based on self-reporting.

Study investigators concluded, “Zinc deficiency may perpetuate the underlying pathophysiology of IBS and may contribute to the associated psychiatric conditions through zinc’s role in the immune system, ‘brain-gut’ axis, and gastrointestinal barrier integrity. This suggests that zinc supplementation may be a potential therapy both to mitigate underlying pathology as well as improve symptoms. Our findings should be confirmed in future studies, and the association of copper-zinc ratios with symptom severity, and the response of symptoms to supplementation could be investigated.” 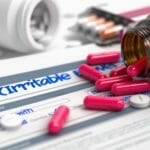 Rifaximin and Meaningful Pain Improvement in IBS With Diarrhea