According to findings from a retrospective single-center observational study in patients with ulcerative colitis (UC), tofacitinib, a Janus kinase inhibitor, was associated with improved short-term efficacy, when compared with vedolizumab, an integrin receptor antagonist. Findings were presented at the Advances in Inflammatory Bowel Disease (AIBD) 2019 meeting in Orlando, Florida.

In order to better understand short-term outcomes with these therapies, study authors used real-world clinical data to assess remission rate and response rate at 2 and 6 weeks in UC patients initiated on tofacitinib (n=38) or vedolizumab (n=28). Remission was defined as a partial Mayo score of ≤1 point, while response included a partial Mayo score of ≤1 point or a decrease of ≥ 3 points. No significant clinical background factors were observed between the 2 groups (ie, clinical duration, relapse-remission type, colitis type), however, the authors noted that the severity of UC was greater in the tofacitinib group.


With regard to safety, no serious treatment-emergent adverse events were observed in either group including pulmonary embolism.


“In the present study, tofacitinib tended to have a higher short-term efficacy regardless of the severity of the disease and the previous usage of biologics,” the authors concluded. They added that “further head-to-head study is required to extend these findings and determine the appropriate therapeutic options in terms of long-term efficacy and safety.” 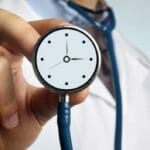