There may be a bidirectional relationship between symptoms of psychiatric disorders and adverse disease outcomes, clinical activity, and development of future psychiatric symptoms among patients with inflammatory bowel disease (IBD), according to a study published in Gut.

Among patients with anxiety at baseline, minimum follow-up was 1 year, with a maximum of 3.9 years. Analysis showed that anxiety at baseline was associated with a significantly higher risk for escalation of treatment (relative risk [RR], 1.68) hospitalization (RR, 1.72), visits to the emergency department (1.30), or a combination of multiple adverse outcomes (RR, 1.21).

Minimum follow up for studies including patients with symptoms of depression at baseline was 1 year, with a maximum of 11.6 years. Likewise, it was found that depression at baseline was associated with higher risk for disease flare (RR, 1.60), escalation of treatment (RR, 1.41), hospitalization (RR, 1.35), visits to the emergency department (RR, 1.38), surgery (RR, 1.63), or a combination of any of these (RR, 1.26).

Among the 3 studies that examined gut-to-brain effects, minimum follow- up was 1 year, with a maximum of 8 years. Included patients had no evidence of psychiatric symptoms or diagnoses of psychiatric disorders at baseline. Clinically active disease at baseline was found to impact future development of both anxiety (RR, 2.24) and depression (RR, 1.49).

This research was limited by the small number of eligible studies included in the analysis. Additionally, duration of follow-up in some studies may not have been long enough to adequately analyze all outcomes of interest. Finally, significant heterogeneity was present among certain analyses.

“These findings support bidirectional effects of the brain–gut axis in IBD,” the researchers stated. “Future studies should focus on identifying patients at highest risk of these deleterious effects, perhaps by examining symptom trajectories during longitudinal follow-up, to institute appropriate treatments to minimise the impact of poor psychological health on IBD activity, as well as active disease on psychological health,” they concluded. 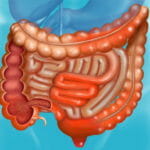