Although one of the main causes of disease-related death in patients with Crohn disease (CD) is gastrointestinal (GI) cancers, diagnosis strategies and appropriate treatment selection in this patient population currently remains a significant challenge for physicians. A case-by-case analysis in a multidisciplinary approach is often advised, as it has the potential to ensure the best diagnostic and therapeutic evaluations of patients with CD following GI cancer onset. These findings are based on a review published in Cancers.

Study author Claudio Fiorillo and colleagues conducted a review to provide a comprehensive summary of the current knowledge on CD-related GI malignancies. The investigators discovered that in the first decades of the last century, a connection between inflammatory bowel disease (IBD) and colorectal cancer (CRC) was identified. Patients with CD are known to be at an increased risk of developing CRC compared with the general population.

However, a recent meta-analysis and case-control study showed similar overall survival between patients with CD-related CRC and patients with sporadic CRC. More specifically, a study spanning nearly 50 years found a mortality of 0.47/1000 person years (PY) and 0.31/1000 PY for CD-related and sporadic CRC, respectively.

Although endoscopy remains the preferred method of diagnosis and surveillance of GI malignancies, radiologic imaging is becoming an appropriate diagnosis and adequate tumor staging. However, endoscopic surveillance is considered a well-established procedure that can reduce CRC-related mortality by detecting malignant and premalignant lesions (eg, dysplasia).

In a study of 69 patients who began cancer therapy while their IBD was in remission, 17.4% experienced a relapse. Hormonal therapy alone (hazard ratio [HR] 11.04 [95% CI, 1.22-99.85]) or in combination with cytotoxic chemotherapy (HR 9.71 [95% CI, 1.16-81.08]) was linked to an increased risk for IBD reactivation. On the contrary, cytotoxic chemotherapy induced IBD clinical remission in 66.7% of patients who began cancer therapies with active IBD.

The researchers found that colorectal resection with lymphadenectomy was considered the gold standard for treatment of resectable CD-related CRCs. Key factors that should be considered for indication of surgery are disease localization and cancer stage, patient characteristics, comorbidities, expected quality of life, and CD natural history. In addition, the lifetime risk for intestinal resection is 80% for patients with CD. This may increase the complexity of surgical procedures while influencing the surgical treatment choice.

Artificial intelligence (AI) and machine learning (ML) show promise and represent a step forward in IBD diagnosis and management. The investigators noted that AI can enhance the detection rate of adenoma in the general population, with a sensitivity and specificity of 98% and 93%, respectively. The use of ML may also be beneficial, with its potential to distinguish between different types of polyps (benign or malignant), as well as between inflammatory or neoplastic lesions.

The study authors concluded that adequate assessment of risk factors, ad hoc surveillance, and selecting the most appropriate treatment strategy has the potential to yield more desirable long-term outcomes in patients with CD following GI cancer onset. These findings highlight the importance of a multidisciplinary management approach to mitigating the challenges associated with the diagnosis and treatment of these patients. Though, it should be noted that further large cohort studies in a randomized setting are warranted to ascertain the best diagnostic and treatment pathways. 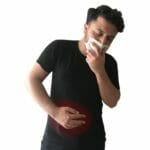