The underlying pathophysiology of inflammatory bowel disease (IBD) is complex, with the immune system playing a significant role. Patients with Crohn disease (CD) and ulcerative colitis (UC) have a pro-inflammatory state within the gastrointestinal (GI) tract that is dominated by a hyperactive immune system. Similarly, human immunodeficiency virus (HIV) also affects the immune system, specifically targeting cluster of differentiation (CD)4 cells. CD4 cells are within the GI tract and specifically targeted by HIV, which can lead to increased mucosal permeability.1

When comparing HIV and IBD, both conditions may be considered to have opposing effects on the body’s immune system; IBD leading to hyperstimulation and HIV leading to an overall immune deficiency. A unique subset of patients are persons who have both IBD and HIV. Both conditions can lead to a dysfunctional mucosal barrier, dysbiosis, and changes on the cellular level (including macrophages, monocytes, and dendritic cells).2 These intricate interactions lead to challenging patient management decisions.

Methodology of the GETAID Study

Recently, a group led by Guillo conducted a multicenter cohort study evaluating the impact of HIV on IBD and published their findings in Clinical Gastroenterology and Hepatology.3 This study was termed “GETAID” (Group d’Etude Therapeutique des Affections Inflammatoires due Tube Digestif). The authors matched every patient with IBD and HIV (HIV-I) to 2 patients with IBD who were not infected (HIV-UI). All centers were located in France.

The researchers included a total of 195 patients with IBD in the study, with 65 (33.3%) patients having HIV. The HIV-I group had significantly more men, more colitis, more perianal disease, and more mesalamine use. In addition, there were significantly more patients in the HIV-I group who were receiving immunosuppressants (thiopurines and methotrexate), biologics (including anti-tumor necrosis factor medications and vedolizumab).

Investigators found extraintestinal manifestations in 16.9% of the HIV-I group compared with 23.1% in the HIV-UI group.  The HIV-I group had more patients with active smoking (30%) compared with HIV-UI (19.2%). The diagnosis of IBD was made after HIV infection in 58.5% of patients.  The median CD4 count at the last visit was 705/mm3 (interquartile range, 485-890).

There were similar findings in patients with UC, with no differences found between HIV-I and HIV-UI in the disease course using a severity composite criterion that included hospitalization or colectomy (hazard ratio 1.1; 95% CI, 0.5-2.7; P = .767). Similar to CD, survival without a complicated course was not significantly different between the groups at 1, 3, and 5 years.

The Convergent Courses of UC and CD

The authors concluded that the course of both UC and CD was similar, regardless of HIV infection. The significant decrease in use of immunosuppressants and biologics in the HIV group could be attributed to several different factors. Gastroenterologists may have been hesitant to start these medications in patients with HIV out of concern for predisposing them to infectious risks. In addition, HIV could potentially cause an immunomodulator-sparing effect via interactions in the gut mucosa including the immune system and gut microbiome.

Although a lower CD4 count had been implicated as a contributor in prior research, the authors did not believe it was a major factor according to the median CD4 count at last visit being 705/mm3, which was most likely a result of patients taking antiretroviral therapy. The relatively high rates of malignancy in both groups was not specifically addressed but was somewhat higher than what may be expected.

Leading up to this study, there was limited research on how HIV and IBD interplay, with mostly case reports and case series published. In 2010, Viazis et al published their experience with IBD in patients with HIV in Inflammatory Bowel Diseases.4 This study included only 20 patients with IBD and HIV at a single site. According to the limited number of patients included, it was challenging to make substantial conclusions; however, when compared with the control participants with IBD, patients with HIV and IBD were found to have lower rates of steroid use and infliximab initiation and lower mean relapse rates (0.016/y vs 0.053/y; P = .032).

Almost three-quarters (14/20 [70%]) of patients in the HIV group received immunosuppression during the study period, of which none experienced an IBD relapse compared with 3 of the remaining 6 experiencing a relapse (P =.017). Multivariate analysis found that HIV was the only risk factor that was associated with a lower probability of IBD relapse (odds ratio 0.21; 95% CI, 0.05-0.85).  The authors concluded that the time to first relapse was longer for patients with IBD and HIV compared with patients with IBD-UI.

The co-existence of HIV and IBD raises several additional questions that may be the focus of future research. Whether or not patients receiving immunosuppressants and/or biologics should have their drug levels monitored more closely will need to be evaluated. Therapeutic drug monitoring can often be challenging to have approved by insurance, especially if performed proactively vs reactively.

It is unclear if patients with HIV and IBD need to follow a different cancer screening protocol, both for GI and non-GI related malignancies. Medications such as vedolizumab require additional data especially based on its unique, localized mechanism of action.

Managing patients with both IBD and HIV will continue to be challenging in the future, with new research hopefully providing further clarity on treatments and monitoring. 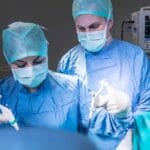