Ticagrelor and prasugrel, the newer generation of P2Y12-inhibiting antiplatelet agents, were found to be associated with fewer gastrointestinal bleeding (GIB) events the first year after percutaneous coronary intervention (PCI) compared with clopidogrel, according to the findings of a recently published study.

In patients presenting with acute coronary syndromes (ACS), adjunctive platelet inhibition with a P2Y12 inhibitor is recommended for at least 12 months following PCI. Treatment with newer P2Y12 inhibitors (prasugrel and ticagrelor) reduces the risk of major adverse cardiac events compared with second generation agents (clopidogrel), however less  is known about the GIB rates of these medications. Because of this, the study authors obtained data from national medical and pharmacy claims from both privately insured as well as Medicare Advantage enrollees to quantify and compare the GIB risk associated with clopidogrel, prasugrel, and ticagrelor.

Baseline characteristics of the treatment groups were weighted using propensity score and inverse probability treatment weighting and the 1-year GIB risk was expressed as hazard ratios (HR) as well as the number needed to harm (NNH). A total of 37,019 patients with ACS within 14 days of a PCI were included in the analysis. HRs were calculated for the overall cohort as well as for subgroups based on ACS event type (non-ST elevation ACS [NSTE-ACS] and ST-elevation myocardial infarction [STEMI]). The mean age of the patients was reported to be 63 years old and 70% were male. Of the total patients, 69% were prescribed clopidogrel, 16% were prescribed prasugrel, and 14% were prescribed ticagrelor.

Findings of the study revealed that, compared with clopidogrel, ticagrelor and prasugrel were associated with lower rates of GIB following PCI. “When compared with clopidogrel, ticagrelor was associated with a 34% risk reduction (HR 0.66; 95% CI, 0.54–0.81) in GIB overall and with NSTE-ACS, and a 37% GIB risk reduction (HR 0.63; 95% CI, 0.42–0.93) in STEMI patients,” the study authors reported. 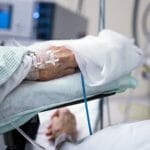 Most US COVID-19-Related Deaths Occur in Medical Facilities