Proton pump inhibitor (PPI) drugs may exert some benefits on the oral cavity in patients with gastroesophageal reflux disease (GERD), according to the results of a study published in Scientific Reports.

Study author Nadia Kawar and colleagues conducted an observational study to identify the function of GERD in the makeup of the oral microbiome. The final study population comprised 128 dental clinic patients: 20 with GERD treated with a PPI (GERD + PPI), 16 who had GERD but were not using any medication (GERD + No PPI), and 92 negative control participants who did not have GERD and did not use a PPI. The researchers determined that patients in the GERD + No PPI group were more frequently tobacco users.

The investigators compared the differences in the microbial population among the 3 study groups. They obtained a total of 128 saliva samples, which produced 4,964,720 reads. Alpha diversity analysis discovered no notable differences among the 3 groups. The researchers conducted the beta diversity study by comparing overall bacterial community structure between the negative control participants and the 2 other groups using the Bray Curtis analysis. The Bray Curtis analysis detected subtle differences between the negative control participants and the GERD + No PPI group; however, the authors stated that “due to the unbalanced nature of the datasets, quantitation by PEMANOVA or ANOSIM of the differences was not possible.” The Bray Curtis analysis revealed no significant discrepancies between the GERD + PPI group and the negative control participants.

The researchers also evaluated individual taxa in all 3 groups. The investigators found that 17 of the 176 taxa at the species and genus subset level in the saliva were discovered by Welch’s t-test to be at different levels between the GERD + NO PPI vs the negative control group. The same comparison between GERD + PPI and the negative control participants revealed no differences in levels found in the taxa. Although the GERD + NO PPI group and negative control participants coordinated according to periodontal status, edentulism, and tobacco use, they still differed according to sex. After adjustment for sex and tobacco use, the results uncovered a substantial difference in 4 taxa between the 2 groups.

This study was limited by its low sample size regarding the GERD population and by the uncertainty of what caused the differences in salivary microbiome among the study groups. Nevertheless, the salivary microbiome was determined to be similar between patients with GERD using PPI and in healthy control participants without the disease not using PPI.

The authors concluded that “clinical studies looking at the effects of GERD on the oral cavity should take into consideration salivary oral microbial differences between treated and untreated GERD patients.” 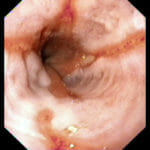