Eosinophilic esophagitis (EoE), which often affects young women of reproductive age, appears to have no negative effects on pregnancy outcomes, according to the results of a new study published in Clinical Gastroenterology and Hepatology

Of 151 female patients treated at the centers, 72 returned the survey, for a response rate of 47.7%. Of the respondents, 20 patients had at least 1 pregnancy; in total, data from 34 pregnancies were analyzed.

Esophagogastroduodenoscopy was conducted during 8.8% (3/34) of pregnancies. Two patients had bolus impactions and 1 patient developed herpes simplex esophagitis. Pregnancy-related complications, including 1 miscarriage, occurred during 11.8% (4/34) of pregnancies.

Regarding concerns about pregnancy and EoE, 50% of patients report no concerns. The most common patient-reported concerns were fear of heritability (40.0%, 8/20) and fear of medication harming the fetus (30.0%, 6/20).

Limitations of the study included the small sample size and its retrospective nature. The authors also indicated that the survey was a nonvalidated tool, and patient ages at time of pregnancy were not collected.

“Despite the low number, our study represents the largest number of pregnant EoE patients ever examined,” wrote the authors.

2. In patients having inactive disease at the beginning of a pregnancy, a cessation of the treatment may be considered, provided that the patients undergo regular monitoring of EoE during pregnancy.

3. In patients with active disease at the beginning of the pregnancy, the treatment should be continued.

4. After delivery, patients having had an improvement in symptoms during pregnancy must be advised to pay attention to a worsening of symptoms. 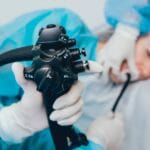