Limitations to this study included changes in participant selection and treatment over the inclusion period, differences in perioperative treatment between the 2 centers, a limited application of the model to centers offering HAIP chemotherapy, and missing data for many participants.

The study researchers concluded that “this model with web-based calculator accurately predicts a 10-year [overall survival] after resection of CRLM based on 15 patient, tumor, genomic, and treatment factors.” Furthermore, they indicated that “it serves as a benchmark for the evaluation of future prognostic biomarkers.” 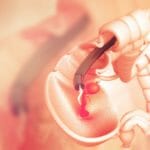