PDE5 Inhibition and Colorectal Cancer Risk: Is There a Link? - Gastroenterology Advisor

Colorectal cancer (CRC) represents the second leading cause of cancer-related death and was the fourth most frequently occurring cancer worldwide in 2018.1 Therefore, CRC has a significant impact on both the morbidity and mortality of the world population.

Many CRCs will begin as precancerous polyps that can be removed during colonoscopies. For those patients with polyps that are not treated, there is an increasing risk for cancer developing over time, with cumulative risk for CRC development ranging from 2.5% at 5 years to 8% at 10 years and 24% at 20 years.2,3 These ranges can vary significantly depending on multiple factors including patient characteristics, quality of colonoscopy preparation, and type of polyp. For example, patients who undergo a snare-polypectomy during their initial colonoscopy will have higher CRC risk in the future. Consequently, there is significant research interest in identifying potential medications that could be used as chemopreventive agents for CRC moving forward.

One of the most researched medications for CRC prevention is low-dose aspirin, with between a 20% to 40% reduction in adenomatous polyps and CRC in patients at average risk for CRC as well as a 13% to 18% reduction in recurrent adenomas.4,5 Another class of medications that have been studied for the prevention of CRC are the phosphodiesterase (PDE) 5 inhibitors.

PDE5 inhibitors include sildenafil, vardenafil, and tadalafil, all of which have been approved by the US Food and Drug Administration for erectile dysfunction. PDE5 has been implicated in the cell cycle of colonic cells, specifically using cyclic adenosine monophosphate and cyclic guanosine monophosphate pathways.6 In vitro studies have suggested that PDE5 is overexpressed in both colonic adenocarcinomas and adenomas compared with in normal tissue.6,7 Therefore there is interest in further evaluating the role of PDE5 inhibitors for the prevention of CRC.

Recently a group of researchers in Sweden investigated the potential protective effect of PDE5 inhibitors against CRC in male patients who were found to have a benign colonic neoplasm that was removed.6 This was a retrospective cohort study conducted exclusively in males in Sweden using the Swedish Hospital Discharge Register between July 2005 and March 2015. The authors used diagnostic codes derived from the International Classification of Diseases, 10th edition.6 The diagnostic codes included those for both hyperplastic and adenomatous polyps. Study patients must also have filled at least 2 PDE5 prescriptions within 5 years of the diagnosis of the benign colonic neoplasm.6

Patients who used combinations of the PDE5 inhibitors had lower risk for CRC as well (adjusted HR, 0.61; 95% CI, 0.40-0.93).6 When evaluating the effect of total cumulative PDE5 inhibitor dosage, those patients with the lowest cumulative dose had a risk for CRC of 0.75 (95% CI, 0.45-1.25; not significant) compared with 0.60 (95% CI, 0.36-1.01) for those patients with the highest cumulative dose.6 Therefore, the overall cumulative dose did not appear to have a statistically significant impact, although the statistical analysis calculated a positive test for trend of the dose-response relationship (P =0.003).6 PDE5 inhibitor use was associated with a greater reduction in the risk for advanced stage (stage III/IV) CRC (adjusted HR, 0.61; 95% CI, 0.37-1.00; not significant) compared with early stage (stage I/II) CRC (adjusted HR, 0.7; 95% CI, 0.50-0.98).6 There were no statistically significant differences in CRC risk and PDE5 inhibitor use when evaluating colon vs rectal cancer and concomitant aspirin or statin use.6

There are several points to consider when evaluating this study. First, although the total number of patients was impressive, there were limited numbers of patients with actual CRC. This patient population was limited to Sweden, which may not be exactly representative of those patients encountered in the United States. In addition, the study understandably only included male patients. Many of the 95% CIs were relatively wide, even if they were considered statistically significant. The diagnosis codes used were for all types of “benign colorectal neoplasms,” however many polyps removed during colonoscopy are hyperplastic in nature and have no significant malignant potential (except in the case of sessile serrated adenomas). Therefore, it would have been interesting to see the breakdown of the polyps found and the impact PDE5 inhibitor use had on each type progressing to CRC. For example, specifically looking at different types of “high-risk” adenomatous polyps, such as those ≥10 mm, with high-grade dysplasia or villous component. Future research should study whether, based on the lack of progression of colorectal neoplasms, the patient’s colonoscopy interval could have been lengthened or shortened.

Although the study did look at cumulative dosing of these agents, it should be kept in mind that the PDE5 inhibitors are typically taken “as needed” and dosing can be sporadic. More detailed dosing analysis to determine whether there is a minimum monthly dose that was associated with decreased CRC would be helpful to clarify whether more frequent dosing is plausible from a real-world prospective. Many insurance companies in the United States may not even cover these agents and they have only recently become generic. Therefore, if evidence continues to support PDE5 inhibitors as chemopreventive agents, the practicality of meeting the minimum dose needed would have to be taken into account. 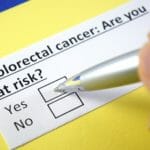 Association Between Oral Antibiotics and Risk for Colorectal Cancers: A Matched Case-Control Study